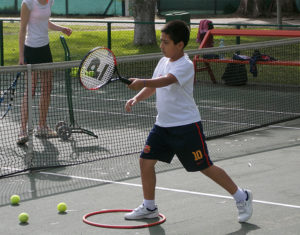 Tennis in Argentina
Although tennis is not traditionally seen as one of Argentina’s main sports, over the years with the emergence of some top Argentinean tennis players such as David Nalbandian and Juan Martin del Potro, the government has been putting a greater emphasis on promoting mass participation and delivering tennis opportunities to the Argentine youth. The kids in the disadvantaged shanty town communities in Buenos Aires are extremely enthusiastic about developing their tennis skills, hoping that one day their passion and dedication to the sport will allow them to gain success and live a more prosperous life. Our tennis coaching volunteer project is their first step on the road to success.

Your Tennis Volunteer Placement
The tennis coaching placement is split into two projects aimed at different age groups and skill levels:
The first project involves volunteer coaches working with a government tennis project aimed at promoting the basic notions of tennis to local kids of 8-12 years old. The Government have decided to include international volunteers in this project as it helps the kids to learn English while promoting the work ethic and concentration that is at the heart of the sport. This project is directed at younger kids who are making the first steps as tennis players. The project aims are to promote mass participation in the sport, building the interest of local kids, and facilitating basic skill development through fun and engaging sessions.

The second project is focused on the coaching and training of teenage tennis players aged 13 to 18 years old. Through the work we do with the government tennis project, our volunteer coaches are invited to assist in the training and development of more experienced players, who may be training for competitions or who may be taking the first steps in becoming one of Argentina’s top young players (you never know!). This project is aimed at boys and girls who are looking to play at a higher level, who have a passion for tennis, and are looking to get more deeply involved in the game. The project aims are to increase the emphasis on skill development and strategy, with coaches delivering more focused sessions.

Your Tennis Coaching Role
You will be supervised by coaches who are hired by the government and they will ask you to help coach tennis to individual players in a friendly and quite informal set up. It will be a good chance to make friends and also play some tennis particularly with local players who occasionally play to a high standard. Your role will be to work alongside the local tennis coaches, helping to organise the training sessions. You will be able to assist the coaches in a variety of ways, for example, by taking smaller groups for warm-ups and fitness work, supervising specific training drills to improve certain shots and strokes, and also organising games and group matches. You may also be able to work with some players on an individual basis, honing certain aspects of their game, be it serving, backhand/forehand strokes or general movement around the court.

For younger age groups, you will help to run fun coaching sessions to introduce them to the sport, while for other players who already have a good grasp of the basics, your role will be to encourage a deeper technical understanding of the game. Coaches will ask you to try and teach the kids some English whilst coaching so it will be a good fun and you will also gain good exposure to the Spanish language as players will struggle to speak English.

The coaching activities take place in different locations within Buenos Aires using the public tennis courts. You will be involved with tennis sessions taking place in the morning and in the afternoon-evening, there is a gap in between these sessions that will give you a chance to rest and have lunch between sessions.